In 2013 Dwight began the Barn Quilt Heritage Trail project. Nine local farmers chose quilt designs and colors with meaning to their families. Many quilt owners worked alongside local volunteers drawing, painting and assembling the designs. A brochure with descriptions of all the quilts as well as a map for locating them is available at the Depot on West Main Street.

The Jablonski Family Farm’s original structure was built in 1910.  The barn itself was rebuilt in 2002, after a fire.  This 40-acre farm has had 7 different owners.  The Quilt design was chosen by the owner’s love for the painting “Stary Night” by Vincent Van Gogh.

The Drach Family home was built in 1996 after the old house was torn down.  In 2010, they aded a Morton shed to the property that has hosted several weddings with the old cattle barn as a backdrop.  The Quilt design was chosen to represent the surrounding windmills, scenic sunsets, and the “hole in the wall” road on which they live.

Don and Joy Ahearn purchased this property in 1994.  The Carriage House structure was built in 2012.  The Celtic Knot Quilt pattern is a tribute to their Irish Heritage. 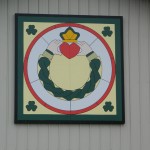 The Feeney Family Farm property was purchased in 1996, and the house was built in 2004.  They grow corn and beans, have cattle, and have recently planted hay fields.  The Feeney farm has a creek running through it with a wildlife habitat program set up on it.  The Claddagh Quilt design was chosen to honor their religious and Irish heritage.

Rose Carter’s Farm was built in 1927 and was originally used as a Dairy Barn and Stud Stall.  It now houses machinery and vehicles.  The ABC Quilt design incorporates the thistle weed in the center that grew on the carter farm. 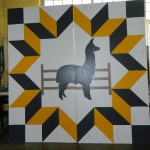 M2A Farm was established by Ron and Kat Medrea in 2003.  Their primary focus is raising registered suri alpacas.  The Quilt design, a carpenter’s wheel, honors the history of carpenters in their family with their logo in the center. 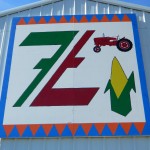 The Zabel Family Farm was purchased in 1939 where three generations of Zabel’s have now lived.  The barn was built in 1974 after a tornado took the old barn.  It is now used as a shop.  The design of the quilt was chosen for the color of farm machinery used and corn grown on the property. 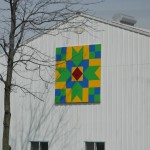 The Lydigsen Family Farm, purchased in 1913, has been owned by three generations over 100 years.  The Quilt design was chosen for the similarity of the quilts the family used to make and the colors of the farm machinery used on the property.

The Bunting Family Farm has been in the family since 1972.  The house was built in 1988 and the barn itself was built in the 1940’s with the purpose of housing farm equipment, which it still does today.  The quilt was chosen to represent all the crops Art has grown throughout his life and all the quilting fun Kathy has had with friends. 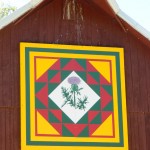