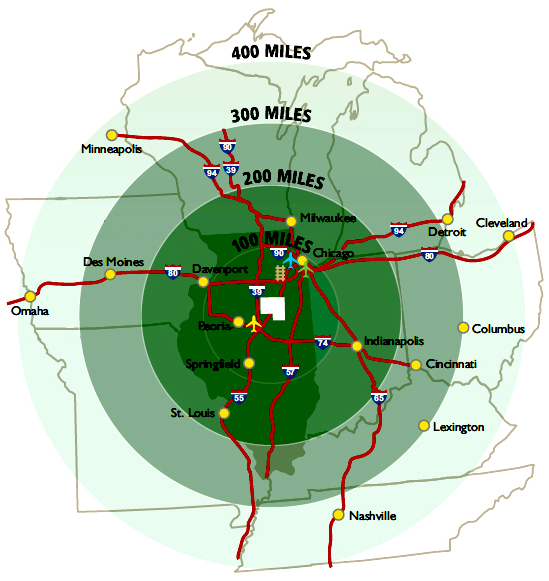 Dwight’s location and transportation options make it an attractive choice for any business. Highlights include:

Interstate 55 runs along the western border of Dwight. Dwight has two exists off of I-55. Each of those exists intersects with one of two state highways that run through Dwight.

Interstate 80 is only 20 miles away and can be easily accessed from Dwight by Interstate 55 or Illinois 47.

The historic Route 66 runs through Dwight, providing an alternative to Interstate 55 through much of Illinois, as well as bringing thousands of domestic and international tourists each year.

Illinois 47, which runs through Dwight, is a north/south highway that travels the western edge of Chicagoland to the north and extends south until it reaches the intersections of I-72, I-74, and I-57.

Illinois 17, which runs through Dwight, is an east/west highway that spans most of Illinois from Iowa to Indiana, intersecting with I-74, I-39, and I-57 along the way.

Only 55 miles away, in Joliet, is one of the nation’s largest intermodal rail terminals covering approximately 2,500 acres. Businesses in Dwight are able to efficiently ship freight to anywhere in the world.

Airway Air options for Dwight include:

Includes a 2,364 foot runway and a fueling station.

Includes a 5,000 foot runway and a jet fuel service station.