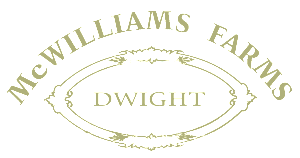 McWilliams Farms was founded in the 1930’s by Charles David McWilliams and the Bank of Dwight.  This service was created for Dwight area farm owners who had moved from the area but wanted to retain farm ownership.  An official office was opened within the bank in 1947, with Alex McWilliams Sr. and Charles McWilliams Jr. at the helm.  Alex McWilliams Jr. joined his father in the business in 1970 and took over operations in 1980.  The business has been at its current location on E. Chippewa since 1997 and can be recognized by its trademark neon United States flags.